On November 10, 2022, Mercy College held a community reception to commemorate Veterans Day and recognize the Mercy and community programs that support veterans in their transitions from the military to college, and from college to successful careers.

Mercy College Vice President of Student Affairs Kevin Joyce served as master of ceremonies at the reception, while alumna Nneka Bell ’17, M.B.A. ’19, began the program with a rendition of, “The Star-Spangled Banner.”

Tim Hall, president of Mercy College, welcomed guests and spoke to Mercy’s goal of providing its 300 veteran students with the necessary services so that they have the opportunity to be successful in earning a college degree.

Mercy was honored to have Reverend Viviana DeCohen ’16, M.S. ’18, a veteran of the U.S. Marine Corps and director of the New York State Division of Veterans’ Services, as the evening’s featured speaker. DeCohen has more than 20 years of experience in veteran services and health care and previously served as the program manager and military/veterans’ counselor at Mercy College, where she worked one-on-one with veteran students to provide them with academic, financial and career support.

During DeCohen’s remarks, she presented Hall with a letter from New York State, which recognized his commitment to serving the unique needs of veteran students and leading efforts to ensure their success at Mercy. To view of video of DeCohen's presentation, please click here. DeCohen also spoke to the state programs that have been successful in providing personalized support to New York’s veteran population since her 2021 appointment to director of the Division of Veterans’ Services by New York State Governor Kathy Hochul.

Manuel Coronel ’23, a current student and soon-to-be graduate student at Mercy College – and a U.S. Marine Corps veteran – also spoke during the program. He described how joining the marines allowed him to understand the true meaning of passion. After serving for nine years, Coronel immediately started studying cybersecurity at Mercy College, an academic major that excites him and a field that he looks forward to joining after graduation. During his remarks, Coronel also mentioned how Mercy provides support for veterans through priority registration, veterans lounges and more.

Coronel also spoke about his involvement in the Mercy College TechWise program. Mercy College is one of five colleges and universities nationwide selected to pilot this program supported by Google that aims to encourage diversity, equity and inclusion in the technology industry. TechWise was started by global ed-tech company TalentSprint. Coronel receives a 100% scholarship for the course plus a $5,000 stipend to help him cover basic expenses so he can focus on his learning. As part of the program, he is mentored by a Google employee, and has already gained leadership and coding skills.

To close the speaking part of the reception, Hall presented the veterans and active duty servicemembers in attendance – including Bell, DeCohen and Coronel – with challenge coins as a symbol of Mercy’s appreciation for their service to our country. 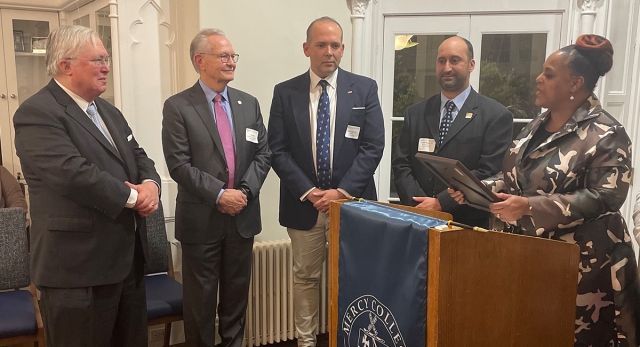 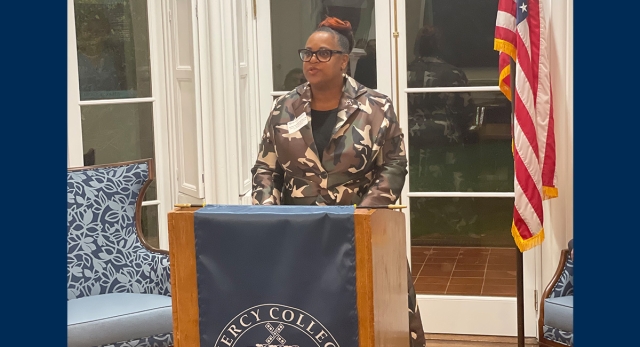