Mr. Daniel R. Black serves as Global Recruiting Leader at EY (formerly known as Ernst & Young), a multinational firm that provides assurance, tax, transaction and advisory services. Prior to this, Black was EY’s Americas Director of Campus Recruiting. He began his career at EY over 20 years ago as a certified public accountant and assurance services professional.

Black is the past president and longtime board member of the National Association of Colleges and Employers (NACE) and is active in numerous other professional organizations, including the New York State Society of Certified Public Accountants (NYSSCPA). In addition, he supports several community and philanthropic organizations. For example, he sits on the corporate advisory board for March of Dimes — and has ranked among its top 100 fundraisers in the country for the past three years — and serves as a volunteer firefighter with the Archville Fire Department in Briarcliff Manor, New York.

Jeremy Kohomban, Ph.D. is the President and CEO of The Children’s Village and President of Harlem Dowling. These organizations support nearly 20,000 children and families each year by providing a broad continuum of programs including evidence-based support for families, shelters for homeless youth and immigrant children, alternatives to incarceration, non-secure detention, adoption and foster care services, alternative schools, affordable housing and specialized services. Both organizations have earned accolades under Kohomban’s leadership: the Children’s Village is the Gold Winner in Overall Management Excellence of the New York Community Trust-New York Magazine’s Nonprofit Excellence Awards, and Harlem Dowling received Emblem Health’s 2013 Commitment to Care Award for Preserving and Strengthening Families. Previously, Kohomban served as senior vice president of Easter Seals of New York, president of the Washington, D.C.-based National Association for Family-Based Services and senior administrator of St. Christopher’s (a New York foster care agency). Previously, he served on Mercy College’s School of Social and Behavioral Sciences Advisory Board.

Dr. Jaime Humberto Nieto '91 is a board-certified neurosurgeon who specializes in spine conditions. He serves as chief of the Section of Neurologic Surgery and Spine Surgery in the Department of Surgery at New York-Presbyterian Queens where neurosurgeons treat the full spectrum of neurological diseases, including brain and spine tumors, strokes, herniated discs and other spine disorders. To date, he has performed over 5,000 surgeries. He also serves as a clinical assistant professor of neurological surgery at Weill Cornell Medicine.

Nieto grew up in Chiquinquirá, Colombia, an Andean town of 40,000 residents. Despite graduating from a Bogotá high school with top exam results, the only possible career path was to work in Colombia’s emerald mines — so he did. When he finally obtained a student visa to study at Mercy College, he drove trucks and did construction work to help pay for his education. Upon graduation, he received the opportunity to attend medical school through a free, New York State-funded post-baccalaureate program.

Nieto earned his bachelor’s degree from Mercy College and his medical degree from Upstate Medical University in Syracuse, New York. He then completed his residency in neurosurgery at the University of California–Los Angeles (UCLA) Medical School and advanced fellowship training at the Cleveland Clinic. 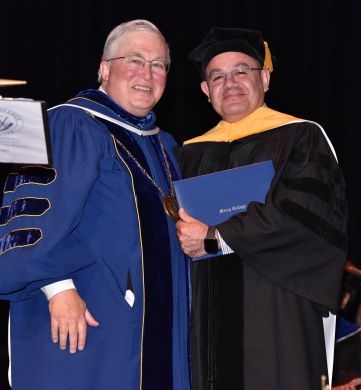 Ms. Tina Thornton is the senior vice president of production and office of the president at ESPN. In this role, Thornton serves as an advisor to ESPN president Jimmy Pitaro and his direct reports, providing insight and input into all matters related to ESPN’s vast businesses. In addition, Thornton continues to oversee several production units, teams and programs.

After joining ESPN as a production assistant straight out of college, she worked as an associate producer on a variety of events — including ESPN’s Sunday Night Football, Big Ten college football, college basketball, the NFL Draft and several X Games and Winter X Games — and led the production of ESPN’s coverage of the NCAA Championships and the NCAA Women’s Tournament.

In 2017, Thornton was named a Women in Cable Television’s Woman to Watch, an accolade given to only three women each year who show tremendous professional growth along with a strong commitment to their companies and the industry.