On September 11, 2021 Mercy College held “A Day of Remembrance” in commemoration of the 20th anniversary of 9/11 to remember those who were killed and honor those who sacrificed their lives to save others on the tragic day 20 years ago.

Two works of art depicting the twin towers – named “Lamentation” and Resurrection” were presented at the ceremony. They were painted and donated to Mercy by Sister Anne Therese Dillen, a member of the Ursuline Sisters, who taught at the Ursuline School in New Rochelle, a school that prepared students to pursue their art degrees at the College of New Rochelle. The paintings will be displayed at the College’s new center for Mercy and CNR alumni - the Moller House in Tarrytown.

Those who spoke at the ceremony recalled touching personal accounts from September 11, 2001 which placed them on Mercy College’s campus, in the classroom, or at Ground Zero. Many remembered the day as a time when New Yorkers forged together to lend each other strength.

“The sense in which Americans and everyone living here came together – that’s one of [the day’s] most enduring legacies. That terrorism attack united us in a common grief and a common resolution that we would stand back up together even having suffered such a blow,” said Hall. He also affirmed, “…we can still do the work of democratic citizenship together.”

Lapovksy, president of Mercy College on September 11, 2001, remembered, “It was a time when everyone came together and helped each other. We opened our residence hall – we only had one residence hall - for anyone who could not get home or who just wanted to stay and be around others.”

“Everyone who could help, helped. That’s a lesson I take away from this very tragic event is the willingness of all of us to help each other,” said Gantz.

During the program Magnus noted Mercy College’s status as a yellow ribbon institution, proudly educating nearly 240 veterans this year. She also mentioned how Mercy’s Corporate and Homeland Security degree was created in 2006 and inspired by the events of 9/11, and how Mercy was the first college in the area to offer this type of program.

Marchi presented the College with the 9/11 “Never Forget” Remembrance Flag. It was designed and produced for the US Army 42nd Infantry Division and presented to each commander deployed to Iraq, to fly the 9/11 Flag at their respective command posts in Iraq. The 9/11 Flag was designed to honor and remember the thousands of heroes lost on September 11, 2001. The Flag is a way of keeping the events and lost lives of that tragic day alive, forever.

Mercy College is grateful for all the ceremony participants’ strength in sharing their stories of grief and hope, and is greatly appreciative to the first responders, volunteers and others who sacrificed for their acts of heroism on September 11, 2021. 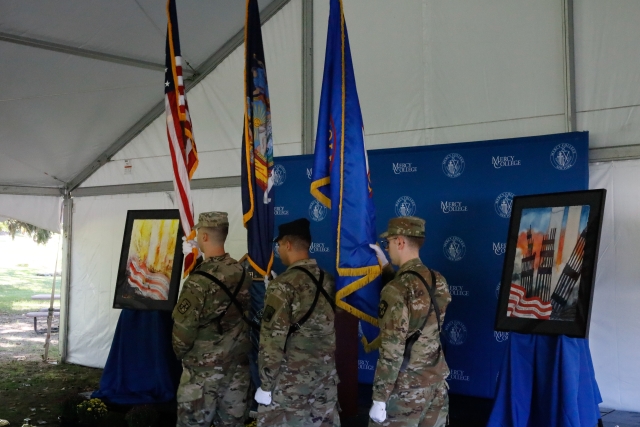 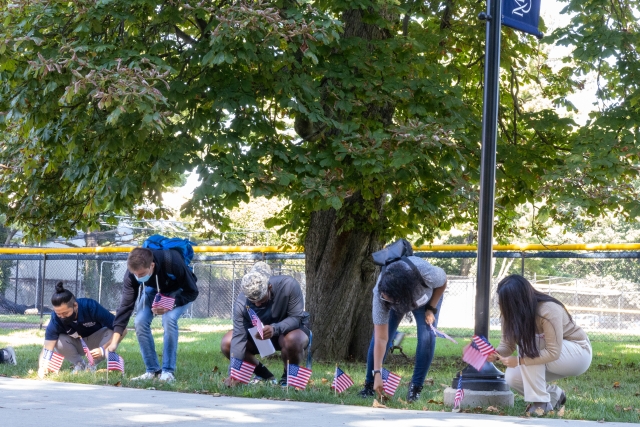