“The actors stuck to their roles really well,” said Lexiemariel Causey, M.S. ’21 — an OT student who participated in the clinical simulation. “It was so helpful in practicing everything we’ve been learning, especially how to instruct someone to do certain things like to sit up or come from sit to stand. That seems simple, but you need to tell the client everything that they might not know to do. I didn't feel like I was pretending.”

Associate Dean and Professor Kathleen Golisz and Associate Professor Jeanine Stancanelli — both of whom teach in the OT program — won a grant from Mercy earlier this year to develop a pilot program that substituted a clinical simulation for some fieldwork. “Throughout the health care professions, there’s a real shortage in the number of clinical sites where we can place students,” Golisz explained. “Many of the professional organizations are realizing this and allowing us to substitute classroom simulations for part of the fieldwork. And I really do think that there are things our students can practice before they see patients that will make them better and safer.”

The primary goal of the simulation was to familiarize OT students with the acute care setting and strengthen their clinical reasoning skills. The first day of the two-day simulation involved watching videos and practicing their observation skills. On the second day, the simulation introduced standardized patients, who are actors simulating real patients. In this case, they were student actors from Mercy’s Theatre Club who were following detailed descriptions of patients’ health histories and symptoms. One actor played an 80-year-old woman who recently had her right hip replaced, and another played a 73-year-old man who had a stroke and lost mobility on the left side of his body — both of which are common types of patients for occupational therapists. The grant enabled Golisz and Stancanelli to offer the actors a small stipend.

Each actor received a patient profile a few days before the simulation along with links to videos so they could prepare to take on the patient’s health condition through speech, movement, gestures and more. Upon arriving at the simulation lab, the actors dressed in hospital gowns and lay down on hospital beds. One student even wore a silicone mask to make his appearance more like an elderly man’s, which Golisz reports was particularly successful in helping the OT students forget that he was an actor and respond to him as an older person.

Each group of OT students received a very short synopsis of the patient’s history before entering the room to conduct their own assessment. “You’re trying to put everything together as fast as possible and trying to put together the patient’s history and what you want to address,” explained Causey. “It's a lot of thinking really quickly on your feet. In the simulation, it was ok to make mistakes, which made me want to try whatever came to mind because we could fail and it would be ok.”

Alexys Tirado, M.S. ’21 — another OT student who participated in the simulation — added, “Having real patients created the back-and-forth conversations that are really crucial in OT. And it was the fact of having someone who is not another OT student. As much as it's helpful working on each other in class and even though we don't consciously give each other help, we know what we're supposed to be doing as the patient.”

“The students in the Theatre Club are studying all kinds of things at Mercy, and we’re always thrilled by interdisciplinary work like this simulation,” explained Communication Studies Instructor and Theatre Club Advisor Marc Palmieri — who is also an actor in his own right. “For those students who do want to pursue acting professionally, this is a real option. I know professional actors who play standardized patients as their day jobs. ” The Theatre Club has worked with other Mercy departments as well, such as providing actors for a recent Forensics Day in which Mercy students solved a murder mystery using DNA analysis and other investigative tools. The Theatre Club also organizes read-throughs of scripts and scenes, acting training, internships at the Irvington Town Hall Theater, and an annual show.

In addition to the student actors, Golisz and Stancanelli invited students from the nursing education program to give the OT students an orientation to the machines and equipment in the acute care setting. “I remember the first time that I went into an ICU, I was overwhelmed by the noises and all this equipment,” said Golisz. “It made me very fearful to approach my patients. So we have the nursing education students give OT students an orientation about what they would encounter in an acute care setting. What are all the machines? What do the machines tell you about how your patient is doing? What sound might you hear when their IV bag is going to run out?”

Though the official data will not come in until the end of the semester, Golisz sees the simulation as a success: “We saw some really nice changes in the two days. For example, students began to shorten the instructions they gave and were clearer when they spoke with patients. And they learned to hide their surprise if something unexpected happened.” She and Stancanelli will formally assess the pilot in December when they examine student surveys and feedback from before the simulation, directly after, and then after students complete their first round of fieldwork.

OT students themselves are already singing the simulation’s praises too: “During my fieldwork now, I'm more comfortable with doing interventions,” asserted Tirado. “My field supervisor recently asked me if I wanted to do part of an intervention, and I was ready because I knew how to talk to patients and how to handle those split-second decisions.” 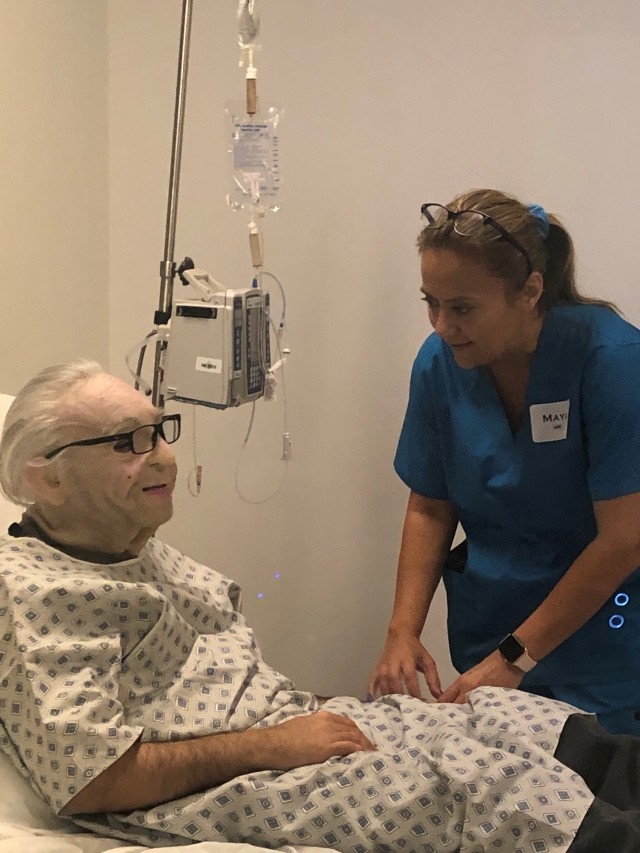 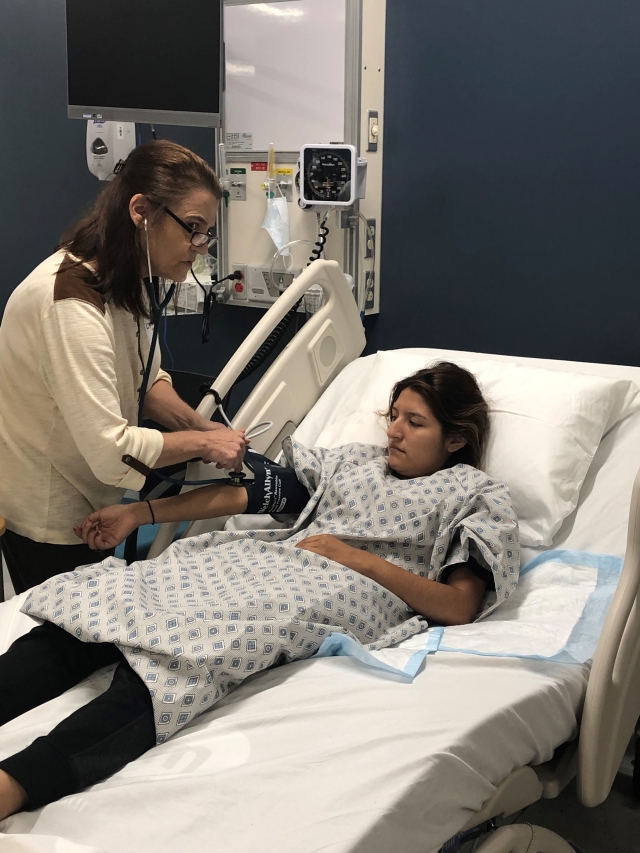